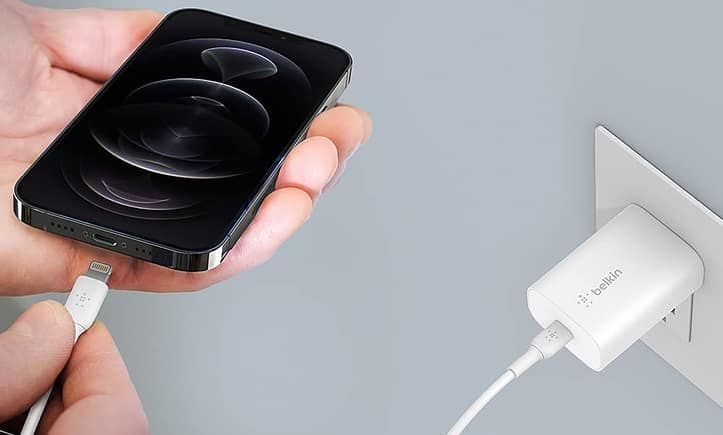 Apple doesn’t give a charger when you buy a new iPhone. So if you don’t already have a compatible charger lying around, you’ll have to buy one from the company. However, while the official Apple iPhone charger is a good option for your iPhone, you don’t necessarily have to buy it as there are several equally good or better alternatives on the market.

How to pick the best iPhone 13 charger

iPhone 13 models support USB Power Delivery standard for fast charging. So if you want to get the top charging speed on your iPhone, you should buy a charger that supports the USB PD standard. Most popular charger brands, like Anker, Spigen, NekTeck, Belkin, Ugreen, and Baseus sell USB PD fast chargers.

Another thing that’s important while picking a charger for your iPhone 13 series phone is the wattage offered by the charger. The iPhone 13, iPhone 13 mini, and iPhone 13 Pro support up to 20W wired charging, so you need a charger that can deliver 20W or more power to get the fastest charging speed. Additionally, while Apple officially says that the iPhone 13 Pro Max also supports only 20W wired charging, the phone has been tested to be capable of supporting up to 27W of charging. So if you get a charger that can provide 27W or more power to the iPhone 13 Pro Max, you’ll get the top charging speed.

Finally, when you look for an iPhone charger on Amazon, you’ll see hundreds of chargers from random, no-name brands, so it’s always a good idea to avoid them. You don’t want your iPhone to go up in flames because of a crappy charger. So always pick a charger from a good brand. The extra money you shell out for a good charger is worth it.

This Belkin wall charger is an excellent iPhone charger for most people. It’ll charge your iPhone 13, 13 mini, or 13 Pro at top speed without breaking a sweat. Moreover, if you have a Google Pixel 6 series phone or newer Galaxy S series phone lying around, it’s also capable of fast charging them.

The charger has mainly gotten favorable reviews on Amazon, and Belkin is known for producing some of the best mobile accessories on the market. If you’re not a fan of Belkin, Anker’s 511 Charger is also a great iPhone 13 charger. It costs about the same as the Belkin charger.

If you are looking for a great charger for your iPhone 13 Pro Max that can charge at the fastest possible speeds, the Anker Nano II is an excellent option. It is capable of delivering up to 30W charging. Additionally, it uses GaN technology to remain cool and have a small form factor.

Apart from the regular USB PD 3.0 fast-charging standard, the charger also supports PPS, so you can use the Nano II to charge Samsung’s high-end phones as well.

Ugreen’s 20W USB PD charger is a good option if you aren’t looking to spend too much on your iPhone 13 charger purchase. It usually costs less than $10 and offers everything needed to charge your iPhone 13, 13 mini, or iPhone 13 Pro at top speed.

Ugreen has used fireproof polycarbonate to build the charger, and it’s scratch and wear-resistant.

The charger supports Quick Charge 4.0+ and older QC standards and USB PD PPS. It also has a small form factor and easily fits in your travel bag or pouch.

You don’t need to sacrifice the charging speed while topping up your iPhone 13, 13 mini, or 13 Pro in a vehicle. The Belkin USB C car charger can deliver up to 20W power, hence providing the fastest possible charging speeds in your car. In addition, the charger comes with a two-year warranty and a $2,500 connected equipment warranty.

It’s built well and has a compact form factor. The charger usually costs under $15 without a cable, but you can also buy it with a bundled lightning cable at around $35.

If you own the iPhone 13 Pro Max, you should get the Spigen SteadiBoost car charger as it can offer 27W of power to your iPhone and charge it at the top speed. The charger also comes with an additional Type-A port that supports QuickCharge 3.0. In addition, you can use the Type-A port to charge one of the Snapdragon-powered Android phones.

The Spigen charger has a small form factor and supports 12V and 24V inputs. It costs under $20.

Apple’s MagSafe Charger is the best option you can get if you want to charge any of the iPhone 13 series phones wirelessly. It offers 15W charging speeds that aren’t possible with a regular Qi-compatible wireless charger.

The charger looks nice and has a pretty small form factor. However, it’s important to note that the charger doesn’t come with a power brick, so you’ll have to use your own 20W or higher wall charger to power it.

The Apple MagSafe charger carries a price tag of $39, but you can usually find it selling at $34.

Most people charge multiple devices daily, so getting a charger that can top them up simultaneously makes sense. The Anker 735 is one such charger that can help to charge your iPhone, MacBooks or other USB PD laptops, and earbuds at once.

Additionally, the Anker 735 Charger uses GaN tech to remain cool and have a small form factor.

These are the best iPhone chargers you can buy right now. If you are also looking for a lighting cable, I have handpicked the best lightning cables in the market.