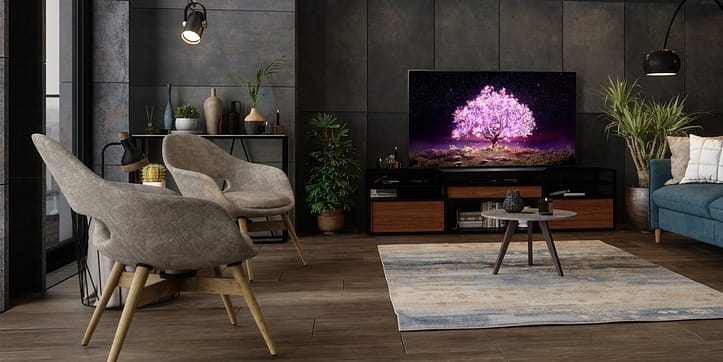 OLED TVs are known for providing the best picture quality, thanks to their perfect black levels and near-infinite contrast ratio. But you’ll find many OLED televisions on the market, from different brands such as LG, Sony, Panasonic, Vizio, Skyworth, and more. This makes picking the right TV difficult, but I am here to help. In this article, I recommend the best OLED TVs you can buy in 2022 and why they are suitable for you.

LG C1 is the best OLED TV for most people. It’s a high-end television that is priced well for its feature set. You get a 4K panel that natively supports a 120Hz refresh rate, four HDMI 2.1 ports, and eARC support.

The TV is beautifully designed, and whether you are hanging it on a wall or putting it on a tabletop, it’ll look great. Its build quality is also excellent.

The C1 has okay brightness and it gets just enough bright to provide a good HDR experience. Speaking of HDR, LG has included support for HDR10 and Dolby Vision IQ. The Dolby Vision IQ is a newer version of Dolby Vision that can adjust the picture quality as per your room’s lighting conditions.

webOS takes care of the smart TV duties, and it has a reasonably good selection of apps and games. You get apps for everything from Netflix to Disney Plus. In addition, if you have LG’s other smart appliances, you can use the TV to control or monitor them. The TV can also seamlessly mirror your LG smartphone’s screen. But mirroring is not limited to just the LG phones as AirPlay 2 is also supported.

Coming to gaming, the LG TV has very low input lag, near-instant response time, support for VRR, ALLM, a Game Optimiser mode. So you have everything to enjoy next-generation gaming.

LG G1 is a step up from LG C1, mainly because its newer OLED evo panel reaches a higher brightness level than LG C1. As per tests conducted by Rtings.com, LG G1 reached over 800 nits peak brightness in HDR, whereas the C1 only managed over 700 nits. This higher brightness allows the G1 to bring out the smallest of highlights in HDR.

Another significant difference between the G1 and C1 is the design. The LG G1 looks vastly different, and it’s primarily meant to be hung on a wall. You can put it on a tabletop, but you’ll need to buy a stand from the company as it doesn’t ship one in the box. Nevertheless, the build quality is fantastic, and the TV feels solid.

The rest of the G1 is pretty similar to the C1, and that’s not bad. You get four HDMI 2.1 ports, eARC, and a native 4K 120Hz panel. The TV also supports HDR10, Dolby Vision IQ, and Dolby Atmos. webOS takes care of the software, and you get the same gaming features as the C1.

The LG G1 is available in 55-inch, 65-inch, and 77-inch sizes. And to make sure people aren’t concerned about burn-in, LG gives a limited five-year warranty on G1’s panel.

Sony’s TVs may be more expensive than televisions from other brands. Still, they provide superior image processing and have industry-leading color accuracy out of the box, making them excellent TVs for watching movies, and the Sony A90J is no exception. It’s the company’s flagship TV in the Master series.

The A90J has a beautiful design and excellent build quality. It includes Sony’s new tabletop stand that can be set up in two ways—flush against the table or raised for soundbar placement.

The highlight of the television is its new OLED panel that, combined with new heatsink technology, allows it to get brighter than most other OLEDs on the market. This increased brightness enhances the TV’s HDR performance and enables it to combat glare in moderate lighting.

The Sony A90J upscales lower-resolution content without issues and can remove 24p judder. There is also support for HDR10, Dolby Vision, and eARC.

Android TV platform with Google TV interface handles the smart TV duties, and it’s easy to use. In addition, you get access to all popular streaming services and tons of other apps.

In terms of gaming, although Sony has included two HDMI 2.1 ports and a native 4K 120Hz panel, VRR and ALLM are missing right now. However, both features are said to be arriving via firmware update in the future.

Since all OLED TVs are pretty expensive, picking a budget OLED TV is more about choosing a great OLED television that is more affordable than the others. My pick for this category—the LG A1—isn’t really a budget TV, but it’s an excellent OLED TV that won’t cost as much as an LG C1 or Sony A90J.

LG has sacrificed a high refresh rate panel, HDMI 2.1 ports, and support for variable refresh rate to get its lower price tag. Therefore, if you want a cheaper OLED TV that supports next-generation gaming features, the LG B1 is a better option than the A1. That said, the A1 is fine for occasional gaming as it has a low input lag, fast response time, and it supports ALLM.

Despite its lower pricing, LG A1 delivers a stunning picture quality as its more expensive OLED cousins. You also get HDR10, Dolby Vision IQ, and Dolby Atmos support. Additionally, the TV has eARC.

The rest of the LG A1 features align with other LG OLED TVs. You get webOS, support for AirPlay 2, a 4K resolution, and more.

Vizio also makes an excellent OLED TV that doesn’t cost a lot, and you can grab its 55-inch model for under $1,000. Simply named Vizio OLED 2020, it has a 4K 120Hz panel. The TV looks incredible and has a solid build quality.

It doesn’t get very bright like other OLED TVs but still provides decent HDR performance. In addition, there is support for HDR10, HDR10+, and Dolby Vision so that you can enjoy high dynamic range content from pretty much all sources.

The TV is also good at upscaling lower resolution content. In addition, there are two HDMI 2.1 ports and eARC support for sending audio to your soundbar or AV receiver.

Vizio OLED 2020 runs on the company’s SmartCast platform, which isn’t the best option as there aren’t many apps. However, since it supports Chromecast, you’ll be able to cast content from compatible mobile apps to your TV.

The television is decent for gaming, but its input lag isn’t low enough to satisfy competitive gamers. Furthermore, even though Vision advertises VRR support, tons of bugs hamper the feature. So you get better off with LG C1, B1, or G1 for next-generation gaming.

How to pick the best OLED TV for you

While all OLED TVs on the market offer deep blacks and an excellent contrast ratio, their brightness levels, smart TV operating system, HDR support, gaming features, and audio enhancements make them different from each other. You have to look for these features and pick the one that matches your requirements.

The one crucial thing to note about OLED TVs is the brightness. Unlike LED TVs (LED-backlit LCD TVs), OLED televisions don’t get too bright. While this is fine for a dark room setting, you are better off with an LED TV if your TV room gets a lot of ambient light. Also, not all OLED TVs get equally bright. Some are brighter than others. So if an OLED TV’s peak brightness level is particularly low, it can hamper the TV’s HDR performance by being unable to bring out the small highlights.

Different TV manufacturers use different smart TV platforms in their OLED TVs. For example, LG has its own webOS, whereas Sony implements the Android TV operating system. Others like Panasonic also have their own smart TV platforms. While platforms such as Android TV and webOS are pretty decent and come with a decent selection of apps, including popular streaming services, others lack an extensive app library or offer a sluggish experience. So, you have two options. You can either avoid a brand that has an inferior smart TV operating system or buy a streaming stick, like Chromecast with Google TV, to plug in an HDMI port for a new smart TV platform.

HDR or high dynamic range content support is one of the most significant changes to happen to modern TVs. I won’t go into the nitty-gritty of HDR and SDR here, but it’s as straightforward as saying HDR is better than SDR. But for the best experience, you need HDR support and HDR content. Even in HDR, there are different formats, like HDR10 (basic HDR), HDR10+, and Dolby Vision. While every TV that says it’s HDR enabled supports HDR10, HDR10+ and Dolby Vision support varies. The more number of HDR formats your TV supports, the broader selection of content you’ll be able to watch in its full glory.

With the arrival of Sony PlayStation 5 and Xbox Series X, HDMI 2.1 has become very important. It allows your TV to support 4K gaming at 120fps, a key new feature in the latest generation consoles. But if you have an older generation console, you don’t need to worry about HDMI 2.1. That said, it’s good to have for the future.

Apart from HDMI 2.1, you want your TV to support variable refresh rate (VRR) and auto low latency mode (ALLM). VRR allows your TV to match the frame rate of the gameplay, whereas ALLM automatically enables game mode on your TV when it detects gameplay on your connected console. In addition, low input lag and a great response time are also crucial.

If you buy a high-end OLED TV, it’s a good idea to get a soundbar for a good audio experience. But to make sure your TV sends all the necessary audio data to your soundbar or AV receiver (AVR), you need eARC support. eARC is the latest audio technology that supports sending high-res and object-based surround sound data to your soundbar or AVR. The older ARC standard can only send six-channel compressed audio data and has no support for uncompressed audio and newer surround sound formats.